On December 13, 1933, a group of younger members of the two Toronto branches of the United Empire Loyalists' Association of Canada met at the home of Major Vaughan Maclean Howard to discuss their proposed participation in the approaching Toronto Centennial of 1934. Through Lt. Col. H.R. Alley, the city's Centennial committee Director, the loyalists of these two branches had been requested to take part in an historical pageant at the Canadian National Exhibition commemorating the arrival of the Loyalists, John Graves Simcoe, and the founding of York-Toronto. The idea received generally enthusiastic support, with over sixty people participating, all in period costume. Many of the younger, more active members from Toronto Branch and Governor Thomas Carleton Branch (the latter composed principally of maritime expatriates) may have felt that the "Old Guard' within their respective branches should not monopolize on Loyalist affairs and that Loyalist descendants should take a more prominent role in the forthcoming sesqui-centennial observances of their ancestors' arrival in Upper Canada-Ontario. This group was to form the nucleus of the Governor Simcoe Branch which commenced its regular monthly meetings early in 1934 and, after considerable effort and not without some regrettable dissension, received its Branch Charter on May 18, 1937. 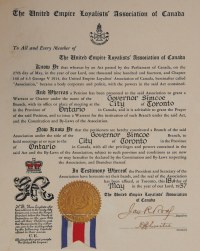 From its very inception, the Governor Simcoe Branch dedicated itself to an enlightened and outward-looking Loyalism. Far from a narrowly-defined obsession with genealogy and filiopietism, the Branch was determined to play a meaningful role in the community at large, be it through its social and cultural activities; in its patriotic endeavours; or by means of its educational programs and concern throughout the years with historical preservation. Possibly because the Branch possessed no permanent headquarters throughout its history, it was forced to go out into the community and thus gained a better appreciation of its place in that community. At any rate, the Branch has had quite a nomadic existence during the first half-century. Between December 1933 and October 1934, it met in the Officer's Mess of the Toronto Regiment in the Spadina Armouries (later Connaught Laboratories). It gathered at the Heliconian Club on Hazelton Avenue between November 1934 and May 1936, from whence it moved to the I.O.D.E. Headquarters in the old Eaton home on Lowther Avenue from September 1936 to March 1950. Governor Simcoe Branch then convened for some time at the former U.E.L. headquarters at 30 Prince Arthur Avenue form April 1950 until May 1964, and then briefly returned to the I.O.D.E. Headquarters between October and December of that year. From January 1965 until May 1978, the branch met in Maurice Cody hall, St. Paul's Anglican Church, and from October 1978 to 1983 the meeting place was the Auditorium of the Toronto Board of Education Centre. The meeting in December 1983 represented the 373rd monthly meeting, not including numerous other executive, informal, and commemorative gatherings.

From its early years, the Branch entered upon a very active and energetic social life. It hosted a Sesqui-Centennial Colonial Period costume Ball at the Royal York Hotel, on April 13, 1934, and a year later, on May 1, 1935, organized the Regency Jubilee Ball, held at the Eaton College Street Auditorium. While it began as a closely-knit family, in an attempt to broaden its base and to play a cultural role in the community at large, the Branch, during the 1930's, hosted a series of musical evenings. These ranged from "Musicales", such as that held in October 1935 at the Royal York Hotel, under the distinguished patronage of Sir Ernest and Lady MacMillan, to "Music at the Crossroads", a light-hearted melodrama. The wealth of photographs and press reports to be found in the Branch Archives bear eloquent witness to the sumptuous garden parties held at the homes of the Cawthra-Elliotts and the Carters.

All this was to change, of course, with the outbreak of the Second World War in September 1939. More than thirty young men and women from the Branch joined the Canadian Armed Forces. The Branch "Carried On" with charitable activities and relief work. The few social events that were held, mainly bridge parties, were for the purpose of raising funds to purchase Christmas gifts for servicemen. The ladies of the Branch contributed a major effort, knitting, sewing, and filling "ditty bags" for the armed forces. In a letter of appreciation for their efforts in regard to children orphaned in the London Blitz, Alice Massey wrote that their contributions made her proud of her own Loyalist ancestry.

Following the return of peace, the Branch recommenced its normal schedule of monthly meetings. The choice of speakers who addressed Governor Simcoe Branch accurately reflected the broader interest in Canadian history shared by its members. Over the years, to give but a few examples, the Branch has been addressed by Professors James Talman, George W. Brown, A.H. Young, Duncan McArthur, and Chester Martin on the history of the Loyalists. Professor Maurice Careless and Brigadier Willis Moogk have spoken to us on John Graves Simcoe, and Mary Quayle Innis and Professor David Klee have addresses us on the subject of Elizabeth Simcoe. On the history of York-Toronto, we have been addressed by Percy Robinson, Edith Firth, Stewart Wallace, and Brigadier J.A. MacInnis. With a strong emphasis on historical preservation, we have learned of our province's material cultural and heritage from both Dr. and Mrs. Joseph Burr Tyrrell, Edwin Guillet, Anthony Adamson, Peter John Stokes, Marion MacRae, John Rempel, Hugh Macmillan, and Donald Blake Webster. And our Branch has been addressed on broader Canadian themes by speakers such as G. Blair Laing, J. Tuzo Wilson, J.G. Althouse, Col. David M. Stewart, and Francess Halpenny. Thus for a half-century, the governor Simcoe Branch has been in the forefront in promoting Canadian history - not solely as related to Loyalist ancestors, but to the city, the province, and the great country in which we live as well.

The Simcoe Branch took an active role in the restoration of Fort York from the mid-1940's on, and annually participates in commemorations held there. Members of the Branch played no small role in the formation of the John Graves Simcoe Memorial Foundation and in that body's successful efforts to restore Wolford Chapel in Devonshire, England, the final resting place of this province's first Lieutenant-Governor and his wife. Our recent formalization of our commitment to the history of our province through affiliation with the Ontario Historical Society underlines the dedication of the Branch to history writ large. Simcoe Branch has been in the forefront as well of historical outings, from its summer excursions to Niagara-on-the-Lake in early years, to its organizing of the Loyalist Homecoming to the Mohawk Valley in October 1971, and large-scale participation in the Maritime Bicentennial in 1983.

In conclusion, while Governor Simcoe Branch has now grown to many times its original size in recent years, that original feeling of family and sense of purpose that led to its founding have remained strong. The goals of our founders have been in large measure realized. No doubt all bitterness between the two Toronto branches has long since vanished and been replaced by a healthy spirit of competition which benefits both, and the Association as a whole. The extensive holdings of our Branch Archives have now been microfilmed and are now, in keeping with our spirit of openness, available to the people of this city, through the Central Reference Library; this province through the Archives of Ontario; and this country, through the Public Archives of Canada. And the wealth of material which our Branch Archives contain attests to a half century of enlightened Loyalism on the part of Governor Simcoe Branch.